Another Awesome Week at Camp 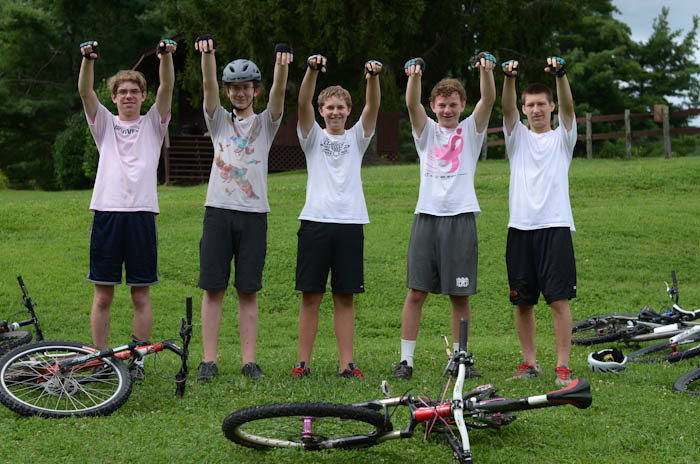 What an amazing Saturday…and it didn’t rain!  I hate to complain about the rain so much when there are so many places that need it so badly.  I sure wish we could share the water wealth.  Anyhow, there was a ton of fun and excitement going on for Saturday.  Even root beer floats!

We kicked the day off with Hank and Dan cooking up some great pancakes.  The tradition of the director cooking cakes on Saturday morning has been going on for many years! Hank and Dan do an incredible job!  Our Starter parents came in to pick up the guys that were here for just the week. I enjoyed connecting with all of them and seeing how excited the boys were to see their parent too.  The excitement grew stronger as we moved into the morning.  The climbing guys had an event called big wall day where they got to try out porta-ledges, as well as some cool rope systems like the Tyrolean Traverse.  Hiking had a little bit of Americana going on with car camping day.  The event was complete with yard games, a generator running the ice cream maker, a giant fire ring, Jiffy Pop, and even an SUV with loud music.  You would have thought we were at the local KOA campground!  The barn had a series of field trials out in the pasture for riding.  Canoeing was stacking boats and making a moving house boat out of canoes.  It’s a strange but fun event that came to be through the inspiration from the movie Waterworld.  The boys like the slide that is part of the floating barge as well.

My favorite activity of the day was down at archery.  The staff put together a special event called a “clout shoot.”  This event is setup on a large field where the boys shoot at a target far away.  It requires them to shoot at a high angle rather than directly at the target.  The “clout” or cloth is in the middle of the field and it represents the center of the ten ring.  Boys release volleys of arrows up in the air and try to get as close to the clout as possible.  Staff make measurements with a marked string that represents all the rings on a target.  Each camper creates a score based on their shots in relation to the center.  If you could image how excited the guys were as they all got to release their arrows at once high in the air.  A ton of fun!  Check out the pictures of this one.

We wrapped up the afternoon with “beautification hour,” dinner, and finally our square dance.  So on our square dance nights we send all the guys back to shower at freetime/choice period so that they are ready and beautiful for the ladies.  Tonight we hosted the ladies from Keystone Camp just on the other side of Brevard. A wonderful group of ladies that really enjoy coming over for the evening.

That’s all I have for tonight.  As we approach our final week of the July Session, we will keep you up on details for closing day, not to mention all the awesome stuff we have planned for the week ahead.

Have a great night.