Pictures from August 5, 2012 (password required) – Today’s pictures are from Saturday and Sunday. 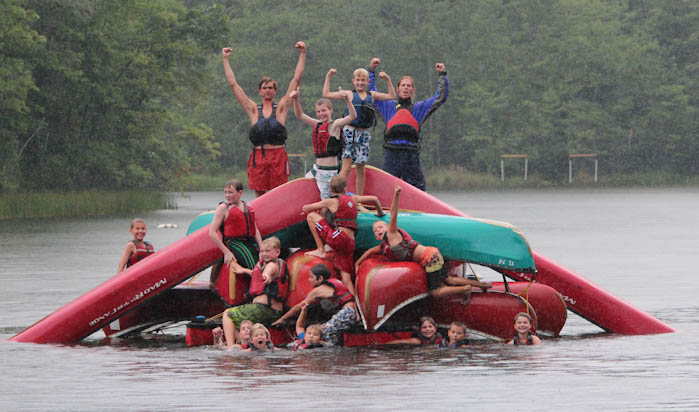 I was thinking today about the changes camp has gone through over the years & decided to look at the early “blogs”.  The first summer we had a website was 1996 & our first summer of posting pictures was 1999.  Here is what our first summer posting looked like:

Our first pictures were taken with a polaroid camera, then scanned with the “cutting edge” scanner of the time.  It probably weighed 30 pounds!  Here are the first set of pictures we ever posted:

Today was our first & only Sunday at camp during the two-week session.  On Sundays we sleep in until 8:15, have a morning service by the lake with more reflective songs and a talk by a counselor, usually about things that will have meaning to kids and relate to their camp experience.  Sometimes it is a story about being helpful or making the right decisions.  Today’s story told by Zoob was the story of an unexpected friendship between Owen & Mzee.  Lunch was a big turkey dinner with Sundaes for dessert, followed by an extended rest hour.

The morning activity today was a counselor hunt & in the afternoon was the carnival.  The pictures will suffice to describe the carnival.

Tonight we had an all-camp campfire to finish out the day.  I mentioned at the campfire that there were only five more program days of camp remaining, which brought a collective gasp from the group & had a few campers saying “you’re just kidding, right??”  They say time flies when you’re having fun, & we’re certainly having fun!!

Take care & enjoy tonight’s pictures (a few more than the first blog in 1999).