All that time Zach and I spent snow kayaking last week wasn’t for fun; we were training!  This past weekend we entered the Locust Fork Invitational Canoe and Kayak Races in Cleveland, AL.  Held annually at King’s Bend on the Locust Fork of the Black Warrior River, the Invitational is the first of three events comprising the Alabama Cup Racing Series and marks the beginning of the maintenance gang’s favorite time of year.

You might be asking yourself “Whitewater slalom racing in Alabama?  Whose idea was that?” Well, as a student at the U of A, Zach was heavily involved in the race series.  A couple of years ago some well-directed trash talk from Zach got me fired up to compete, and this year we got former camper/counselor Rob Pingry to join us, too.  Motivation for racing comes pretty easily to us; though there are no cash prizes awarded to winners, the reward of beating your friends is priceless.  Improved skills and a fantastic sense of community are nice perks, too.

But enough about three old farts.  The coolest thing about this weekend was the debut of High Rocks camper Miller Kadarabek on the racing scene!  In addition to racing K1 in the Juniors division, Miller competed in C1 and K1 Championship classes against fields of adult competitors!  While the official results have yet to be posted, Miller finished 4th overall in Championship C1!

Whitewater paddling is a pretty uncommon extracurricular activity for middle school students.  However, after enjoying a rockin’ summer in our program at camp Miller began paddling year-round this fall.  Not only does Miller spend weekends sampling local rivers including French Broad Section 9, Big Laurel, and the Upper Davidson, he has also trains with US Olympian Eric Hurd.  Some folks really connect with team sports, theater, music, art and any number of other amazing activities, but Miller chose paddling for himself.  As a resident of Western NC, he’s certainly in the right place to stay wet!  The coming months will bring more races and river trips worked around a busy school schedule, but this summer he’ll be back on the lake where it all began.  We couldn’t be more proud, Miller!  Keep Charging! 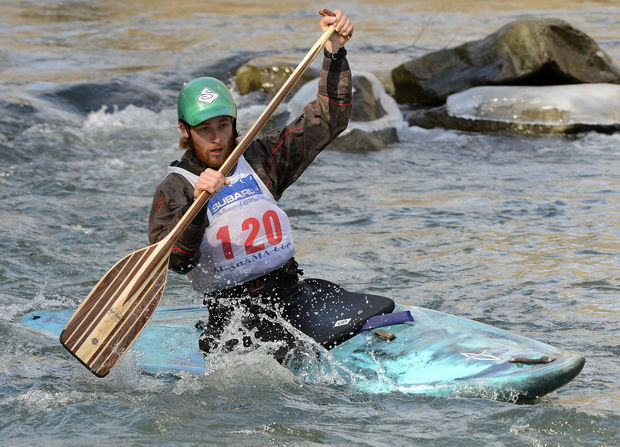