I’m a little late with this post, but nice weather has an odd effect on folks at High Rocks.  The first 60+ degree day of each March is an unofficial camp holiday, so last week’s extended warm temps made a veritable vacation.  When winter breaks, the maintenance staff suddenly swells in size as the bright, dancing  surface of the lake makes keyboard strokes and mouse clicks infinitely unappealing.  At least Hank & Don didn’t light anything on fire this year.  Thanks to a couple of rainy days everyone is back indoors, so here’s the lowdown…

Last weekend Miller Kadarabek threw down at the Glacier Breaker Slalom races on the Nantahala River!  Miller finished up first in his age group in both C1 & K1, and paddled a new C1 he helped build.  Since composite whitewater slalom boats are neither in high demand nor supply, sometimes the best way to acquire one you like is to build it yourself!  Questions on the actual building process are best directed to Miller or Fritz (I definitely have a few).   Check out Miller and his new C1: 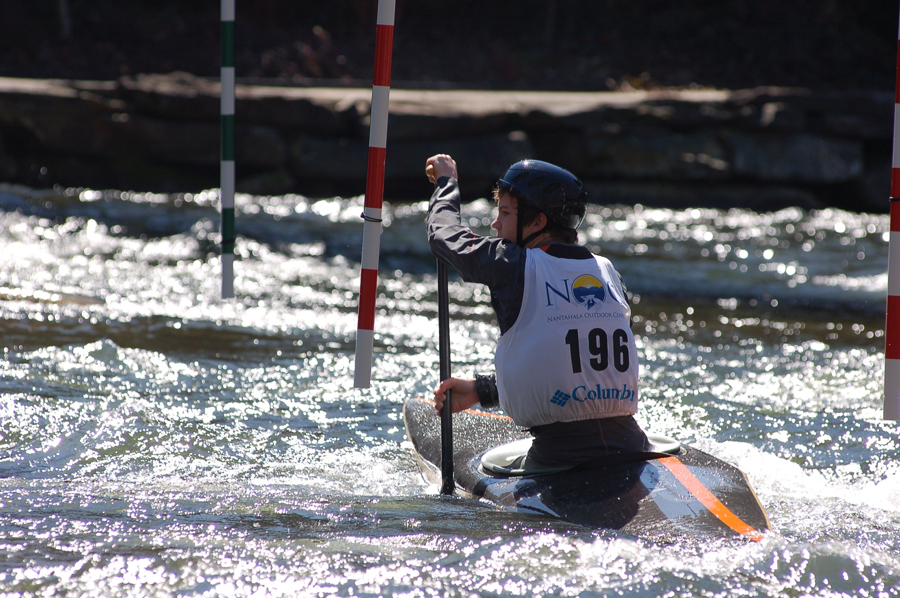 Next weekend, Miller has to choose between competing in the US Open on the Nantahala or trekking down to Alabama for the Locust Fork Classic.  Quite a tough choice, though I don’t think either is a bad one!  Whichever he attends, we know he’ll be living out the only rule of our paddling program: look good.

In more general news, trees are budding throughout the forests!  Topography draws particularly bold and soft swaths of red among maple trees, especially.  The family West and I took a hike in nearby Panthertown  Valley on Saturday and enjoyed watching the wood first bat its eyes after long sleep.  Lichen is blooming, to be followed by so many other creatures with displays of renewed life.  It’s pretty easy to wax poetic as 35 degree rain falls outside my window.  Hooray March!  Maybe I’ll get to go paddling later.

Anyway, the machine of Camp is charging toward May and our first programs faster and faster each day!  Zach has a tally of days until Ms. Debbie’s first meal of the season is served, and I’m pulling for chicken fingers and fresh chocolate chip cookies.  We hope everyone out there in web-land is doing well!  Party On!