Whoa!  Camp is officially empty for the first time since May.  And although a torrential downpour is currently ripping fall’s festive color from the trees, this is still a spectacular time of year to be in Western NC.  No matter your pursuit, passion, or pleasure, somehow this season makes whatever you do downright delightful.  Maybe fall triggers a subconscious urge in all critters to get outside and play in order to make savings of good times before winter exacts her heavy price for leaving the house.  And since we don’t have any more LEAP groups this season, here are my top five reasons that an October camp session would be a most excellent addition to our program schedule:

1.  No Bugs.  While I believe that there are things in this world we cannot control (like mosquitoes) and complaining about these things is entirely counter-productive, I have no problem appreciating the difference in number of irritating flesh wounds I sustain while playing outside this time of year.  Parents, remember what your son’s legs looked like at the end of the four week?  Between dwindling insect populations and long pants this negative externality of camp life is pretty much mitigated.   I could safely add the mass death of poison ivy to this point and perhaps better label it “lack of environmental irritants.”  Either way, fall isn’t as itchy as spring and summer, and that’s a good thing.

2.  Campfires are fun AND practical.  Our Sunday and closing campfires are highlights of the session for campers and staff alike.  Communal fires, however, take on further importance when gathering around them becomes a matter of pragmatism.  In July, the band bears performing in front of the dancing flames with copious back-sweat.  Nobody has to tell campers to stay away from the fire during the summer; unbearable heat makes a great natural barrier.  Furthermore, the fire’s light goes pretty much unnoticed until after 9pm when the sun finally sets during June and July.  Now, the fire draws everyone closer with its comforting warmth and cheerful glow since darkness falls right around dinnertime.  Really, fire becomes inviting at all times of the day during the fall.  How sweet would it be to sit in front of a roaring fire in the lodge while waiting for the breakfast bell to ring? 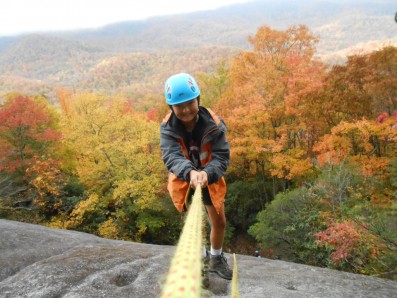 3.  Mother Nature tie-dyes like nobody’s business.  I know I talk about the leaves too readily anyway, but I wouldn’t have anything to say about them if they weren’t such a powerful stimulus.  Starting October 1, color caresses only the highest peaks and ridgelines of the forest.  As the month draws on, reds and pinks, oranges and yellows march down the mountains and wrestle away green’s omnipresence.  The sky, when clear, is a shocking electric blue.  When it isn’t, the soft grey glow of the clouds and absence of shadow stets off a riot of color in the forest.  Don’t think it’s as spectacular as I say?  Fine, stay at home and don’t crowd my trailheads.

4.  Every outdoor activity is somehow made more pleasant in the fall.  Even swimming is still tolerable if the sun is out, and the great circumstance of celebrating 2014’s final voluntary immersion still makes going for that last dip in the lake totally worth it.  Whitewater paddlers are thankful for low pressure systems that roll up from the Gulf and trees that are far less thirsty than other times of the year (Seriously!  Not just trees, but all plant life puts noticeably heavy pressure on the water table during spring and summer).  If it isn’t rainy, rock climbers are overjoyed by cooler temperatures that make hanging on an exposed rock face all day unusually comfy.  Cooler weather also improves friction and makes specialized rock shoes stick to the smallest of irregularities in the surface of the stone.  Bikers, hikers, and fishermen, too, feast on fall’s bounty; crisp air rewards movement in apology for summer’s suffocating blanket of humidity.  And though there are many folks on the road, the crowds in the forest have largely dispersed and lonely trails invite quiet exploration of familiar places in new garb (see point 3).

5.  Dolly’s is still open!  Although once November 1 rolls around you’ll have to go to the dairy bar down 64 that serves as their off-season outpost.  And if you can still sit in a rocking chair on Pisgah’s front porch with a two-scoop waffle cone full of camp-flavored nostalgia, then all must be right with the world.

Our LEAP students get a taste of camp in this delightful time and clime, but a traditional multi-week camping session could make for a truly spectacular way to experience fall in the NC mountains.  Current campers and families, what do you think?  Does October camp sound better than spending this month in school?

Seriously, though, as much fun as non-stop camping sounds, I know I appreciate having the rest of the year to prepare the outstanding program we enjoy all summer long.  Everyone in the office wishes our extended camp family the best, and we look forward to hearing from and seeing many of you while we are out on the road recruiting the rest of this month.  If you’re curious about where we’ll be and when, check out the official schedule here.    Keep in touch, and we look forward to visiting with you soon.