Winter lingers on the lake’s frozen circumference and hangs heavy in dawn’s icy branches.  Departing my car for the office each morning I can’t fail to notice that the gravel of the parking lot, typically crunchy and fluid under my footsteps, is a single, silent matrix of cold granite chips.  I don’t need a large terrestrial rodent to tell me that winter isn’t ready to pack up and leave yet.

Still, I can’t shake the feeling that summer is right around the corner.   As a camp professional, I really can’t avoid a serious preoccupation with summer.  Even though gathering forms and taking applications, filing permits and finishing renovations isn’t quite as glamorous as paddling the Nantahala River or enjoying an afternoon of field games with Camp Illahee, everything the directorial staff accomplishes during the winter months is crucial to the success of our summer program.

Among our numerous winter duties is hiring, but truthfully staffing is a continuous process.  By the end of our August sessions we’re already evaluating next year’s prospects.  By Thanksgiving you can bet your retirement that we’ve already issued a round of contracts for the following summer.  Naturally, we enjoy an increase in contract confirmation and application volume around the holidays; our collegiate staff get a chance to decompress and ponder their summer options during breaks from school.  But with waves of good news come troughs of disappointment: some of our favorite folks tell us they’ve got other plans.  It makes sense.  Because we’re blessed by such a talented, motivated, and accomplished staff, I expect that many prospective High Rocks employees weigh camp counseling against other opportunities.

Particularly, we notice a recurring trend of excellent staff pursuing internships in lieu of camp.  But why?  From our experience it’s evident most of our rock-stars opt for the internship out of a perceived requirement; that by not interning they hinder their chances of securing post-collegiate employment.   While we have a healthy organizational bias against losing great staff, we are fully confident that compared to interning, a summer spent counseling at High Rocks is every bit as valuable and impressive on a resume.  Indeed, we further believe that the work you do here is likely a better use of your time than interning.  Here’s why:

Camp gives young people real responsibility.  Cabin counselors are charged with creating an emotionally and physically safe space for up to 8 people and maintaining that space twenty-four hours a day for multiple weeks.  Activity instructors are required to engage and instruct multiple participants of varying ability levels in a multi-year progression while abiding by risk management protocols and industry best practices.  That’s serious work even if you are having fun the whole time!

Furthermore, counselors excel in motivation and communication.  Think about a typical evening activity at High Rocks! A counselor disseminates a series of instructions, sets the goal of enjoying a fun, fair game, and inspires all parties involved to play hard, play by the rules, and to do it together!  You can laugh at my example only after considering 1.) How easy it is to facilitate a game played by fifty individuals under the age of ten, and 2.) In which position an intern is most often to be: part of a group being led, or a leader guiding a group?  Camp is a summer-long exercise in leadership and management. 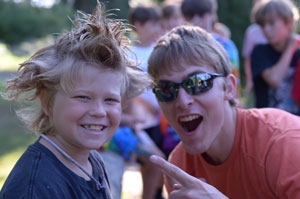 Most importantly, though, camp offers employees daily opportunities to permanently, palpably enrich the lives of everyone around them.    The effects of reaching out to a homesick camper, to a struggling co-worker; of teaching a boy to canoe, to believe in himself extend far beyond a summer session.  Simply put, you matter at camp.

Imagine yourself an employer.  Who is the more distinctive, valuable candidate?  One of a million similar applicants who followed a format, completed a checklist, and learned to appear productive for forty hours a week?  Or, instead, someone who was an invaluable asset in their last place of employment.  Who is a practiced, proven leader, empathetic and adaptable.  Who makes a positive difference in the lives of other people.

If my ravings have failed to cement the value of working at camp in your mind, consider the following pieces by other authors:  This one outlines the calculus buy which a former college student weighed his decision to work at camp instead of interning.  This one features a father’s take on his daughter’s decision to camp counsel against his own wishes.  And this article by the American Camp Association proves “camp belongs on your resume”.  I admit that I may have belabored my point, but forgive me.  My workstation is adjacent the wood stove, and the march to my car isn’t getting any warmer.

But I dare, double-dog dare you to find a better place to spend your summer than High Rocks…